If you are a homeowner, odds are that you have done some research on home security systems. And regardless of whether you go with a wired, wireless, or hybrid security system, it’s impossible to deny the benefits of a home security system. Not only does it give you peace of mind knowing that the authorities will be alerted if someone tries to break-in, but this additional security measure can also work as a deterrent to criminals. Security alarms can keep your home from becoming a target. If you are wondering how do alarm systems deter crime, then keep reading! 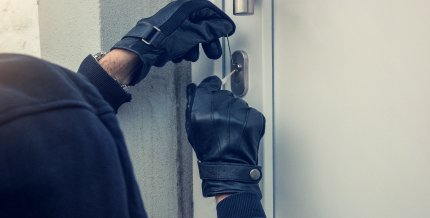 Home burglaries remain a huge problem in the United States. In 2015 alone, there were over 1.6 million such crimes, with the average monetary loss valuing over $2000. To make matters worse, a large percentage of these crimes are targeted towards those that live alone or are considered weak; they also are increasingly likely to occur while the resident is home, making the likelihood of the crime turning violent higher.

Does Having an Alarm System Deter Burglars?

It’s impossible to calculate an actual percentage of crimes that didn’t happen. But according to a study undertaken by the University of North Carolina at Charlotte, of 400 incarcerated men and women who were convicted for home burglaries, 60% reported they would move onto another easier target if a security system were present.

Another perk of modern alarm systems is their increasingly sophisticated levels of integration with smart home technology, which allows homeowners to receive real-time notifications straight to their cellphones if there is any sort of security breach in your home. 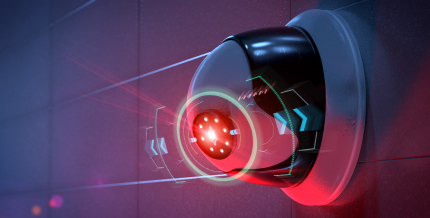 Already have a basic home alarm system in place and looking to increase security measures in and around your home? Security cameras provide an added level of comfort for homeowners interested in protecting their largest investment. In the event of a break-in, the property isn’t the only thing you have to lose—an unsolved burglary can also rob homeowners of their sense of safety in their own home. And with 87% of home burglaries going unsolved due to lack of evidence and/or witness testimony, there’s never a better time than the present to invest in your peace of mind.

In addition to providing a 24/7 witness to your property, installing security cameras could also save you some money on your homeowner’s insurance and help displace part of your upfront installation costs. In a study conducted by the Electronic Security Association, researchers found that homeowners could receive premium discounts of up to 20% if their home is equipped with a monitored alarm system. Give your homeowners insurance provider a call to see if your home security system qualifies you for a discount!

Other Measures You Can Take to Protect Your Home

Alongside installing a monitored home security system with cameras and alarms, we’ve compiled a list of security measures you can (and should!) take to deter burglars and protect your home today: 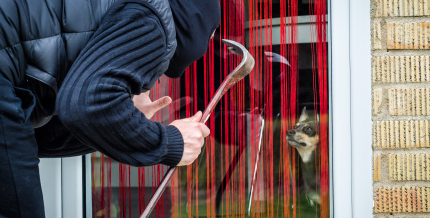 Dogs aren’t just man’s best friend; they’re also an excellent deterrent to theft. A barking dog is often enough to discourage a potential burglar, so your dog doesn’t even need to be large or aggressive—an imposing bark is enough.

Keep the TV on

Fool burglars into thinking someone is home by leaving a TV on in an area easily visible from the street. Or, for a more energy-efficient option, invest in a device that mimics the flickering light given off by a TV and uses roughly the same amount of energy as a nightlight. 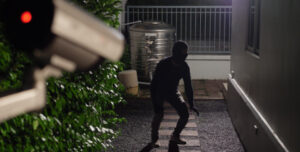 Create open spaces in your landscaping and keep bushes trimmed so burglars have fewer places to hide, and consider placing thorny plants in vulnerable areas of your home. Add lighting to walkways and throughout the yard to make your home unattractive to burglars while elevating your home’s curb-appeal.

Select a deadbolt that has been given a Grade 1 from the American National Standards Institute. To make existing locks more secure, install a heavy-duty strike plate using three-inch screws that penetrate the wall stud. Make sure the door strike is held in place by four or more screws. And strengthen the door frame by installing a door jamb reinforcement product.

If you have a security system, it is likely that your provider will issue you with a yard sign that indicates that your home is protected. This is a visual deterrent because it makes criminals aware that they may be recorded or otherwise more easily caught in the act. They are far more likely to move on to an easier target.

Put Your Lights on a Timer

If you know that you are going to be out of town, especially during the holidays, it may be a good idea to consider putting your lights on a timer. Nothing attracts potential burglars like a consistently empty house, so the last thing you want to do is leave your house dark for days on end. Putting your interior and exterior lights on a timer is a great way to give the illusion that someone is home. If you have holiday lights outside, you can also put those on a timer; however, if you’ve seen Home Alone, you’ll know that this isn’t fool-proof.

Be aware of security gaps

Turn on your interior lights, open your curtains, and walk around the exterior of your home at night. You’ll see what’s visible to a burglar from your yard or sidewalk. Take note of valuable items visible from the street and consider moving them to a more secure location, or draw the blinds more frequently.

At Mesa Alarms, we take the safety of your home and family seriously, and we hope this has answered your question, “Do alarm systems deter crime?” Our diverse offering of security measures includes motion detectors, security cameras, and other home alarm systems features designed to keep you and your loved ones safe. If you want to protect your home and deter burglars, contact us today!